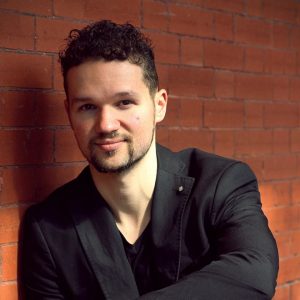 Philippe started out as a tap and ballroom dancer in his very early ages in Germany. Inspired by world renowned Ira Bernstein, he took part in many international workshops which made him a very versatile dancer and led to his number one passion : DanceSport!

He started training in ballroom and latin alongside the German Ballroom Formation Team. Eager to learn more, he trained in ice-skating in the South of France and ranked second at the French ‘Team’ Championships.

Martial Arts, Jazz and Musical Theatre on top of his ballroom and latin training, made him the well-rounded artist he is today.

Starting his professional life as a successful engineer, he decided to stop this path and dedicate himself to his real passion: dance. After winning many national competitions and ranking in the top finalists in the French Ballroom Championship, Flore and him took the stage internationally. He is a licensed Zumba Instructor, Latin American, Ballroom, Rock’n Roll and Salsa Instructor and also masters many other styles such as Boogie Woogie, Lindy Hop, West Coast Swing, Zouk,…

He now competes for Canada in DanceSport and competes at Advanced Level in West Coast Swing. His classes can be enjoyed in Québec City and Montréal as well as in other events around the world.

He recently danced in Las Vegas in a show for The Cosmopolitan.

It is with enthusiasm and joy that Philippe is devoting his entire life to dancing and transmitting his passion to others. His versatility makes him an incredible asset for any event or dance school

This website uses cookies to improve your experience while you navigate through the website. Out of these, the cookies that are categorized as necessary are stored on your browser as they are essential for the working of basic functionalities of the website. We also use third-party cookies that help us analyze and understand how you use this website. These cookies will be stored in your browser only with your consent. You also have the option to opt-out of these cookies. But opting out of some of these cookies may affect your browsing experience.
Necessary Always Enabled
Necessary cookies are absolutely essential for the website to function properly. This category only includes cookies that ensures basic functionalities and security features of the website. These cookies do not store any personal information.
Non-necessary
Any cookies that may not be particularly necessary for the website to function and is used specifically to collect user personal data via analytics, ads, other embedded contents are termed as non-necessary cookies. It is mandatory to procure user consent prior to running these cookies on your website.
SAVE & ACCEPT